Some dogs were born to become celebrities. And we’re not only talking about doggy actors or record-breaking pups. No, we mean they become celebrities. Indeed, the canines that we highlight today are famous because of their uncanny resemblance to some of our favourite human stars. Stare at these 10 doggy-celeb dopplegangers long enough, and you may begin to wonder which is which. 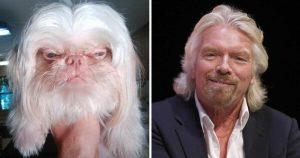 This dog looks like they are constantly asked, “Are you Richard Branson in dog form?” and they’re tired of it.

But, come on – the resemblance is eerie. The eyes. The brows. The white hair parted in the middle. It’s all there.

As far as what kind of pooch this barking Branson is, we can’t say for sure. An albino Shih Tzu? A Maltese Pekingese mix? Whatever breed they are, this pup looks like they just want to be left alone to curl up on the couch and listen to Richard Branson’s many audiobooks.

#2: This silky haired Saluki and Cher

In addition to her inimitable talent and fashion statements, Cher has always set trends with her hairstyles. Well, the Saluki, an ancient breed from the Middle East closely related to the Greyhound, has been sporting this long-haired look for thousands of years.

It’s impossible to say who stole whose hairstyle, but we think it looks great on both of them.

#3: This Dachshund who might be even more chill than Snoop Dogg himself

Ever since the early 90s, Snoop Doggy Dogg has set a global standard for cool. In fact, this blog has paid homage to the Dogg on various occasions.

Clearly, though, the Doggfather himself has some competition. This Snoop Dogg doppelganger might just be the new pinnacle of fresh. Keep smiling, Snoop Doggy Dachshund. We look forward to your pupcoming album release.

#4: Afghan Hound or Saruman the White?

Who can say? This dog and the corrupt former leader of the Istari are completely interchangeable. All we can do is wonder if Gandalf would have had an easier time reasoning with an Afghan Hound than Saruman the wizard.

To be honest, we wouldn’t mind a LOTR reboot with an entirely canine cast. Afghan Hounds, with their long, flowy hair and wise facial expressions, are the perfect doggos for this fantasy world. And, might we also suggest an Irish Wolfhound to play the part of Gandalf the Grey? Just a thought! (A really, really good one.)

#5: Nicole Kidman and this curly-haired Cavoodle

Folks, Nicole Kidman’s signature red curls are back. Which, of course, means that Cavoodles everywhere are feeling a little bit more chic by association.

Did you know that Nicole Kidman is a Cavoodle owner, herself? Like many celebrities, Nicole Kidman is pretty secretive about her pups. With that said, she has graced the internet with a few pictures of her curly-haired Cavoodle.

Be honest. If this Great Dane showed up at your house claiming to be Sherlock Holmes, you would invite him in for tea and ask about his latest case. How could you not?

As it turns out, Benedict Cumberbatch is a huge dog lover! As far as we know, he doesn’t have a doggo of his own. When he is ready to take the plunge, though, we would highly suggest that he adds a Great Dane to the Cumberbatch household.

#7: Laura Dern and her lookalike Kimchee the Maltipoo

Laura Dern can do it all. From playing a whip-smart paleobotanist in Jurassic Park to a take-no-prisoners corporate type in Big Little Lies, she is an actor with incredible range.

Then again, Kimchee’s got some moves of her own. This stylish Maltipoo from Germany enjoys a successful career as an Instagram pupfluencer. She struts her stuff on the streets of Munich, while graciously fielding the question: “Has anyone ever told you you look like Laura Dern?”

Sure, Indiana Jones was a blast. But imagine if that adventure-loving archaeologist also had a furry side-kick? This adorable Golden Retriever puppy would have been perfect for the role.

That said, maybe don’t tell Chewbacca about this super cute Harrison Ford doppelganger. There’s only room for one furry character onboard the Millennium Falcon.

As Miranda Priestly in the 2006 film, The Devil Wears Prada, Meryl Streep served up the best withering glares and most enviable high fashion outfits. However, she certainly wasn’t a boss that any of us would enjoy working for.

For this adorable Shih Tzu look-alike, on the other hand? We’d be first in line to apply for a pupternship. We can guess that this gorgeous doggo demands regular visits to the groomers and the best all-natural dog meals. She deserves it!

#10: Brad Pitt and this longhaired Dachshund

Not everyone can say that they have hair as beautiful as Brad Pitt’s. But this golden-locked Dachshund obviously can! Perhaps they have the same hairstylist. Maybe they both eat only organic meals with plenty of healthy fats and protein. Either way, we’ll never be sure. The first rule of having a doggy lookalike is you don’t talk about your doggy lookalike.

Do you know any doggy celebrities?

Maybe your doggo looks just like a certain actor or public figure. Or perhaps your pup acts like a celebrity more than resembles one. Either way, we hope that this list of dogs that look like celebrities has inspired you to keep an eye out for lookalikes in your own life!