Isa IJzerman, a 22-year-old Dutch model based in Australia, was shooting a marketing campaign in a forest in Byron Bay back in 2016 when she suddenly noticed a woman, who was watching from the sidelines, filming her on her phone. “Oh my god guys, you’ll never believe who it is,” screamed the woman into her phone, as she self-recorded while trying to capture glimpses of a young and puzzled IJzerman. “Gigi Hadid!”

IJzerman didn’t quite see the resemblance. But the rest of the world did.

Though IJzerman had been in the modelling industry since the age of 17, this turned out to be the turning point in her life. As celebrity magazines and gossip columns began picking up the story on the uncanny resemblance between supermodel Hadid and the young, aspiring Dutch model, IJzerman shot to fame on social media. “After internet sites began posting these collages of Gigi Hadid and me, I got 25,000 followers in three days. People thought my high cheekbones, face shape and eyes made me look just like Gigi,” IJzerman told VICE.

When the story of Hadid’s doppelgänger first developed, IJzerman took it as a wonderful compliment, feeling elated that she was being compared to someone rated as the most beautiful woman in the world. But, IJzerman would soon realise, being a celebrity lookalike was not as glamorous as it seemed. “It was a compliment at first, because she’s absolutely beautiful, but as more and more people compared me to her, it put a lot of pressure on me at a time when I was still young and didn’t have the maturity to deal with it,” admitted IJzerman. 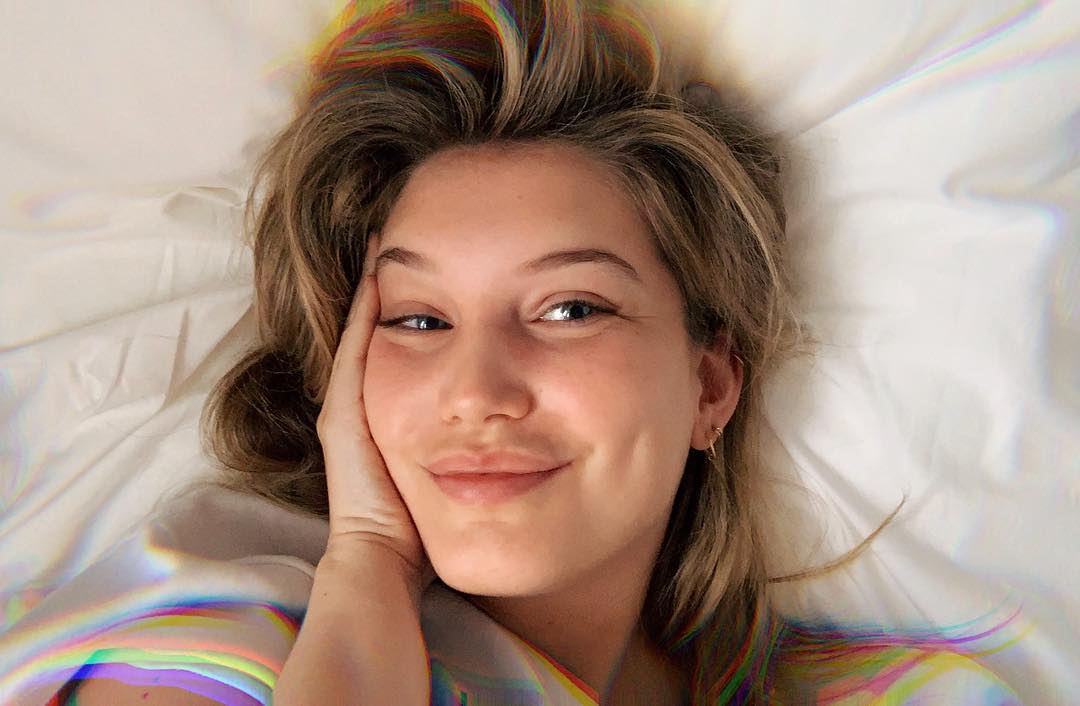 Even as IJzerman was attempting to make a name of her own, her resemblance to Hadid made her feel like she had to look and behave a certain way, especially on social media. Photo courtesy of Isa IJzerman

For a young model trying to carve out a space for herself in an insanely competitive industry, being a lookalike often came with other unforeseen consequences. “I lost out on some editorials because they [booking agents] thought I looked too similar to Gigi, who they had already featured. It was such a negative thing for my mental health to constantly be compared to someone the world sees as perfect, especially when the other person is older and more accomplished. For me, it was a complete loss of my own identity at a time when I was still figuring out who I was.”

Today, IJzerman has managed to break free from the suffocating expectations that come with being a lookalike, and has even modelled for brands like Hunkemöller and Mango, and magazines like Grazia and Vogue. She’s also studying to be a veterinarian. But looking back, IJzerman recalls feeling a total loss of her individuality. “While it was great that being a lookalike got me thousands of followers on social media, if I had a second chance, I would rather have an audience who followed me for me, and not just because I reminded them of someone else who looked like me.”

When it comes to celebrities, all of us are probably guilty of falling for the idealised, extravagant versions we see online, assuming that their perfectly lit selfies and jet setting lifestyles are as good as it gets. So, naturally, the same courtesy is generally extended to people who happen to look like famous people. But, as IJzerman, and many others who actually do look like celebrities, point out, along with the illusion of perfection comes the undeniable pressure to look and behave a certain way.

For Megan Flockhart, a 28-year-old cosplayer and actor based in Glasgow, Scotland, looking like a celebrity triggered underlying issues that deeply impacted her self-esteem and the way she saw herself. “I was told right since elementary school that I looked like Hermione or Emma Watson, especially because I had this thick, frizzy hair,” Flockhart told VICE. Though Flockhart, an aspiring child actor, was regularly compared to Emma Watson’s widely popular character from the Harry Potter series of movies growing up, it was only in her early twenties that looking like her favourite actor became an uncomfortable issue. “I was diagnosed with depression, anxiety and body dysmorphia as a teenager. As a young 20-year-old, after images of me dressed up as Hermione from a Halloween party went viral, my whole self-worth was put into looking like a celebrity.” As people began drawing parallels between Flockhart and perhaps the most popular fantasy character at the time, the cosplayer yo-yoed from enjoying the attention to resenting it, and back again. “Though I got a lot of compliments, I was also regularly trolled, and many people thought I didn’t look enough like Emma Watson. One troll even called me an ‘ugly Hermione’. When you’re that young and vulnerable, it’s easy to get sucked into it [a downward spiral], and feel like it’s all your fault.” 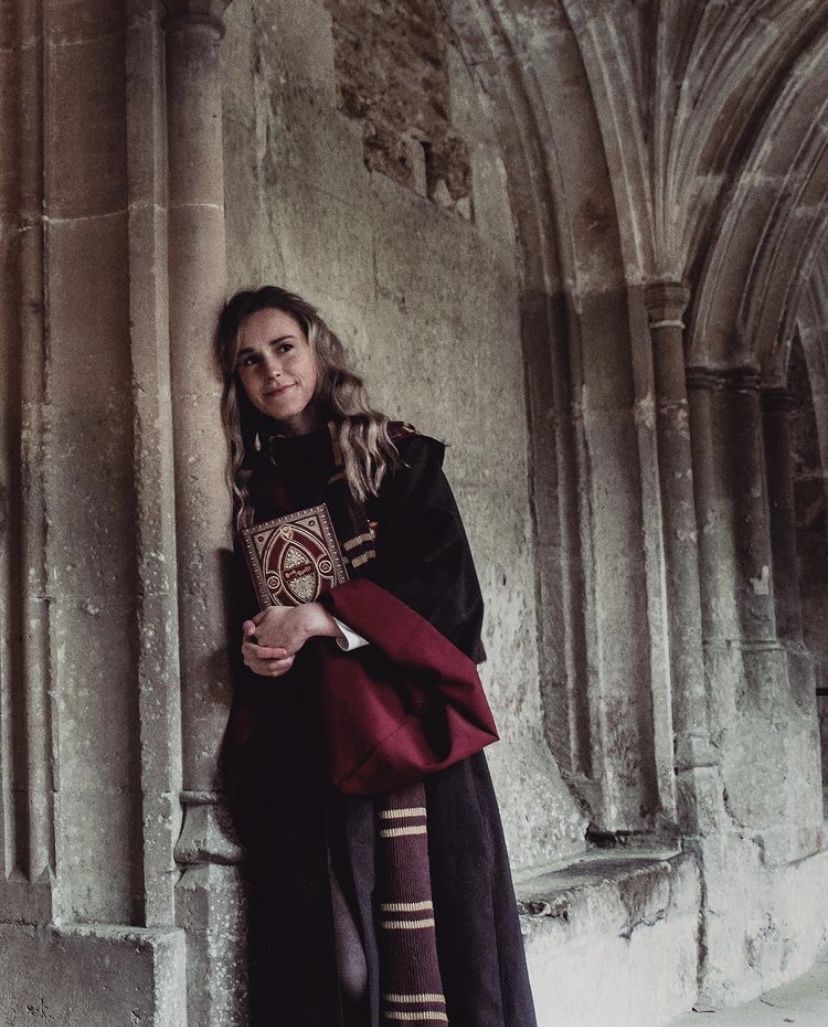 After Flockhart first got attention for dressing up as Hermione Granger at a Halloween party, she soon fell into a downward spiral of questioning her own identity and body. Photo courtesy of Megan Flockhart.

After facing excessive trolling for over a year, Flockhart finally broke her silence through a social media post in 2019, admitting that her body dysmorphia had gotten worse, and even pushed her to digitally edit her facial features in order to look like the perfect version of her celebrity lookalike. “While it’s amazing to look like one of your favourite actors, my heart also goes out to people who look like celebrities,” she said. “We live in a culture which puts celebrities on a pedestal, and it has a lasting impact, especially on young girls.”

Having features similar to her idol ended up causing immense pain to Flockhart. However, she also attributes this toxic time for giving her the opportunity to explore the transformative world of cosplaying. “As painful as it was, it also brought me amazing opportunities. Mainly, it brought me into the cosplay community, and helped me creatively branch out,” she said. Flockhart no longer cosplays Hermione, choosing instead to embrace roles like Bella Swan from Twilight or Daenerys Targaryen from Game of Thrones. “I feel more like myself now, that my following is more loyal, and that people don’t just like me because I look like an actor.” 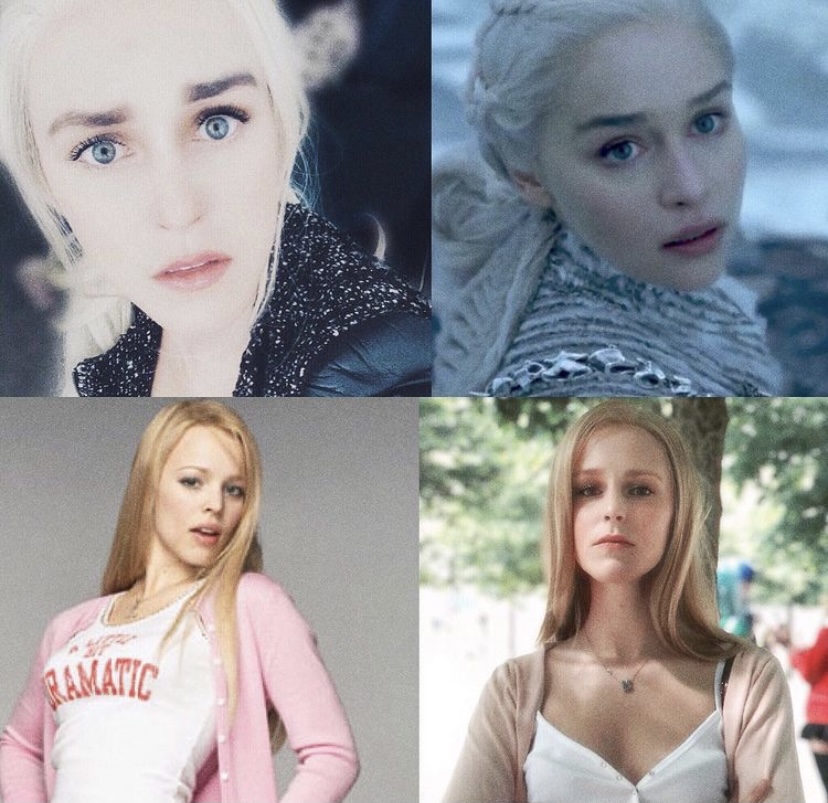 Today, Flockhart is a professional cosplayer and enjoys the creative freedom to pick her own roles. Photo courtesy of Megan Flockhart

While being a celebrity lookalike comes with an unfortunate emotional drain, over time, most frustrated doppelgängers we spoke to seem to have managed to channel the negative feelings into working twice as hard to establish their individual identity.

“I always wished that people would recognise me for my work, and it felt like they only recognised me because I looked so similar to Ryan Gosling,” 32-year-old Joe Laschet, a fashion blogger from Cologne, Germany, whose appearance is regularly compared to the Notebook actor, told VICE. “But it wasn’t a loss of identity for me. In fact, it pushed me to establish my personal identity even more.” Today, Laschet feels his days of simply being a second Ryan Gosling are behind him. “I think being a lookalike helped my fashion career. I got 10,000 followers in one week, and was quickly able to build my audience, then use that [traction] to establish myself as one of Germany’s most popular classic menswear bloggers.” 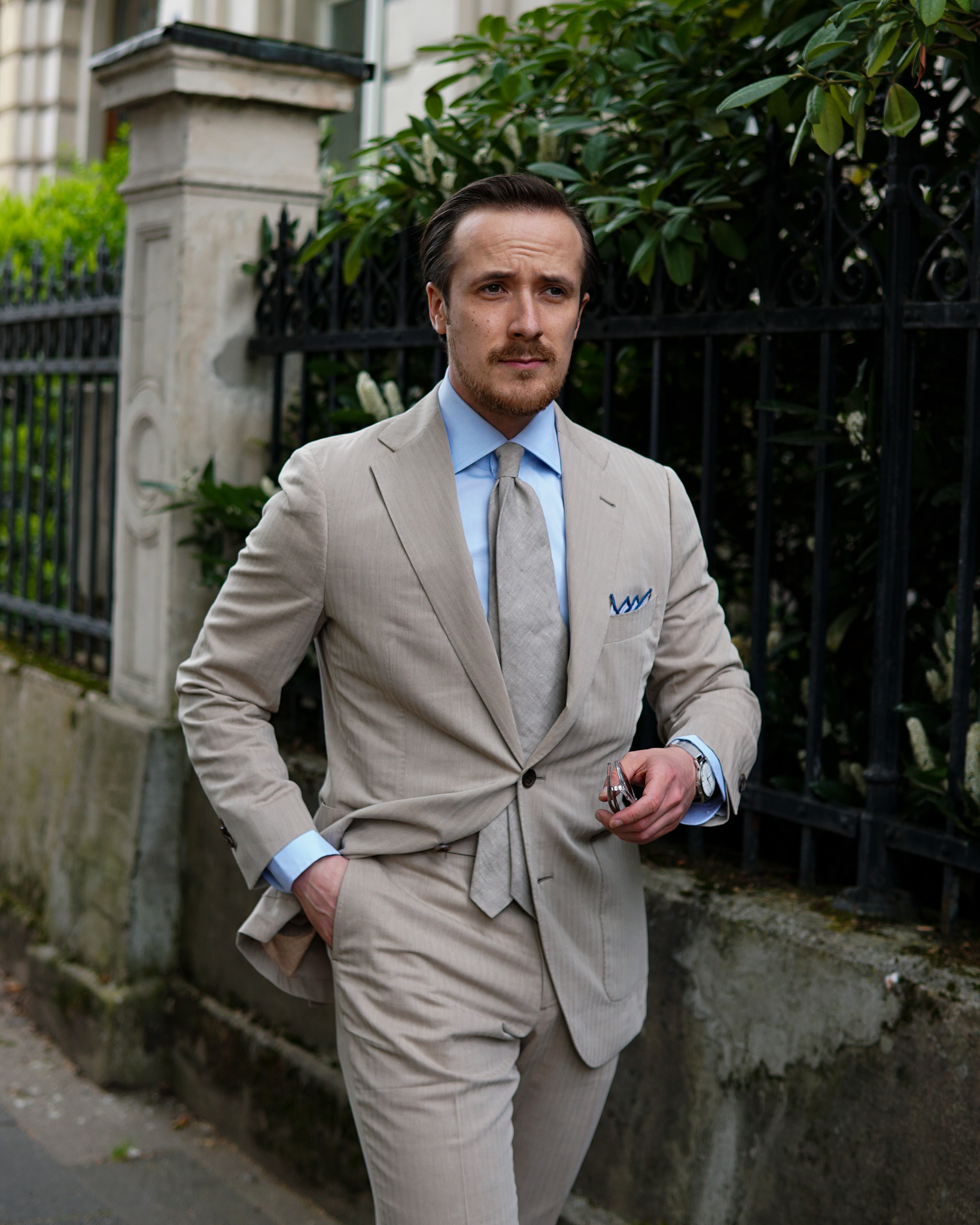 Laschet was able to use the massive following he gained through resembling Ryan Gosling to promote his classic menswear blog. Photo courtesy of Joe Laschet

As it turns out, looking like a famous person can be fairly frustrating in a world riddled with illusionary bodies, hate comments and the pressure to conform to societal standards of perfection. However, the experience has also helped most lookalikes embrace their best selves.

“I was a very shy person before my Instagram had an influx of followers in my comments and direct messages,” Amethyst Rose, a model and influencer from North California who bears a striking resemblance to Lady Gaga, told VICE. “I live in a very small town, so when all of the articles came out, I would go out into public and people would ask me so many questions about it. It forced me to be very social which I’m very thankful for.” 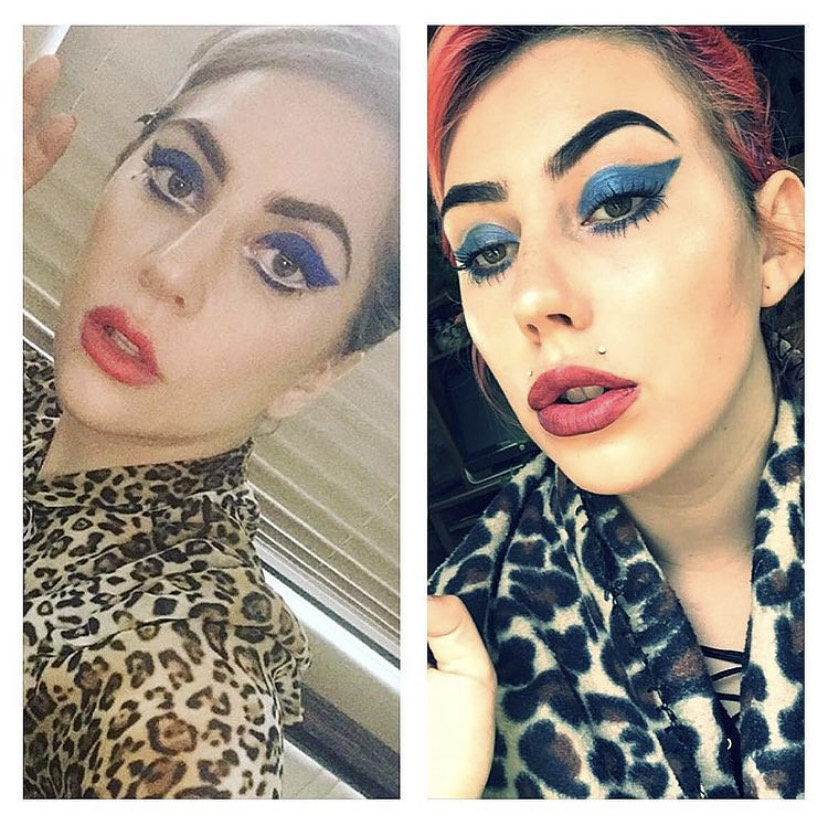 Looking like Lady Gaga allowed Rose to pursue a career as a social media influencer after high school, eventually teaching her to love herself. Photo courtesy of Amethyst Rose

For Rose, a social media influencer who often recreates Lady Gaga’s looks, being a doppelgänger not only helped her on the professional front, but also helped her be kinder to herself. “I did get hundreds of hate comments and even some death threats. But mostly, there have been more pros than cons. I was always very self-conscious about my body and it made me realise I am beautiful, which in turn, helped me accept myself and share that confidence.”