Megastar Amitabh Bachchan‘s granddaughter Navya Naveli Nanda is probably one of the most popular star kids of the industry. Every now and then, her Instagram pictures leaves fans drooling over her good looks. Many even quip about her big Bollywood debut but now it seems that she doesn’t have plans to join Bollywood. Yes, that’s true! Navya recently launched ‘Project Naveli’ which happens to fight against the issue of gender inequality in the country. Not only this, but the young lady in an interview with Vogue revealed that she’s ready to join her father Nikhil Nanda and will be joining the family business.

Speaking to Vogue about her new project, Navya said, “I want to use the resources, people, privilege and platforms that I have to spread awareness and bring change. Studying abroad, I found the women there far more emancipated. I want women in India to feel the same way, to be given similar opportunities. I want them to be masters of their own destiny and take charge of their own lives. I’ve grown up around working women in my family—it’s all I’ve known. To bring that change, you have to start with education and financial independence. That’s where Project Naveli comes in.”

Big B took to Twitter and even lauded her and tweeted, “So proud of you Navya  .. you make all of so proud .. love you ..”

Talking about joining family business, Navya said, “I would be the fourth generation of the family taking the lead—and the first woman. It is a great sense of pride for me to be carrying forward this incredible legacy left behind by my great-grandfather HP Nanda. Every day there are more and more women starting businesses, breaking records, showing up for one another and exuding independence. I am grateful to be living in a time when women are taking charge. The ball is definitely in our court, and I cannot wait to see all the amazing things we are going to achieve.”

Just recently, she was trolled by a user who asked, “What work does her mother do? LOL.” Taking to Instagram stories, Navya wrote, “She’s an author, writer, designer, wife & mother.” Not only this, but she even named the troll and wrote, “Being a mother & wife is a full-time job. Please don’t discredit women who are homemakers! Their role is so crucial in the upbringing of a generation that will hopefully support their contribution instead of tearing it down.”

Have a look at her savage reply here: 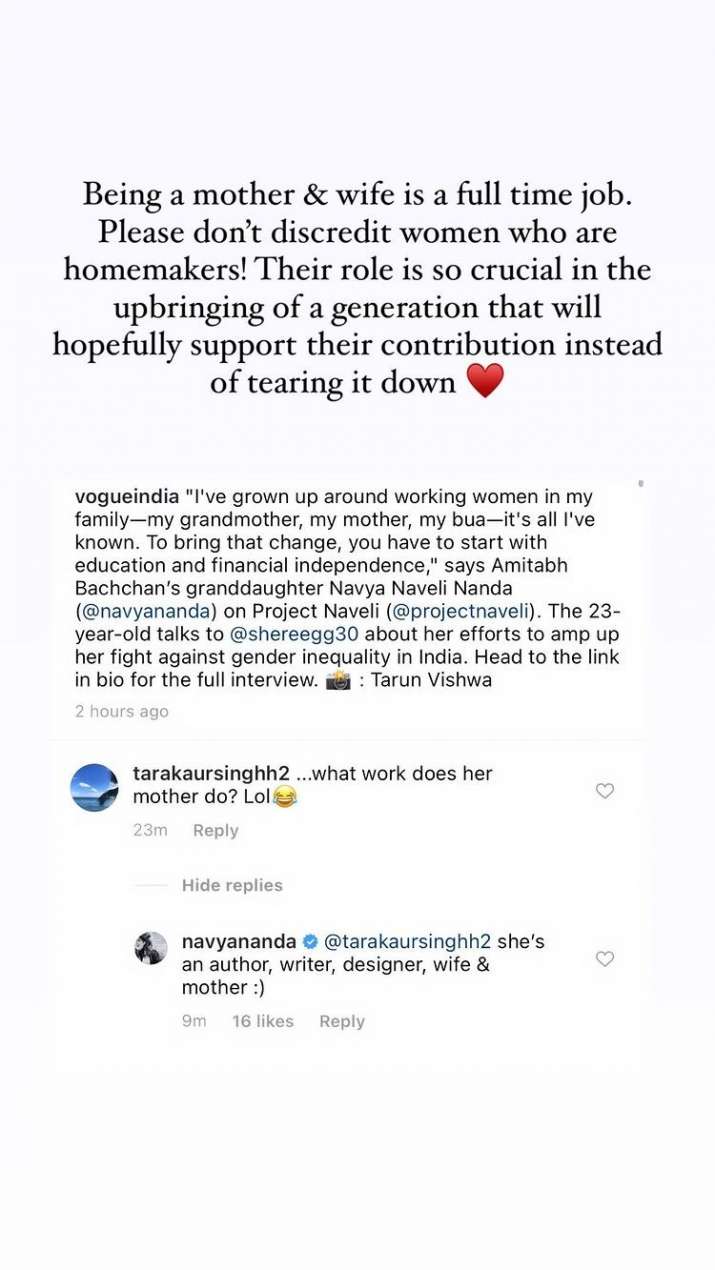 On the personal front, there were rumours doing that she is in a relationship with Jaaved Jaaferi’s son Meezaan Jafri. However, the actor rubbished the claims and cleared the air saying that the two of them are just friends.